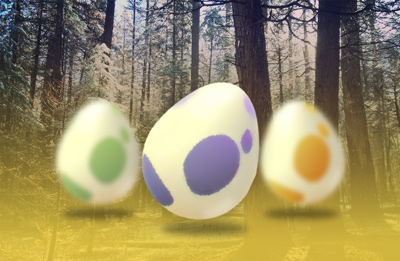 Egg species is determined according to hidden rarity 'tiers' that are not the same as the egg distance tiers (i.e. 2 km, 5 km, 10 km).

We'll take it one step further and show the tiers we believe we have identified and the species therein.

Our researchers have been collecting egg data for many months and have observed several changes to the egg species distribution. For this study, we focus on eggs acquired after Halloween.

5,945 eggs were collected post-Halloween before the launch of Gen II. Here is the breakdown in frequency, by species:

The above visual immediately hints at the tiered nature of egg species distribution. Additional analysis leads us to believe that there are four rarity tiers at play, each 2x as common as the one before, which we have named:

The average hatch rate in each group almost perfectly follows a ratio of 1:2:4:8. The split of Rare and Ultra-Rare unfortunately isn't as evident in this graph. However, when combining these two groups, the frequency counts do not seem to follow a binomial distribution. [Note 2]

With the 1:2:4:8 ratio in mind, Silph Researchers examined known periods of changes to egg rarity, to confirm whether the rarity tiers held - they do.

So which species are in which tier? Pre-Gen II, this breakdown looked like this:

Though Gen II has only been live for a few weeks, the Silph Research Group has been hard at work cracking the new rarity tier distribution. At time of publication, we have collected 2,514 eggs, which is sufficient to be confident in the Common / Uncommon tier species, with a few final ambiguities in the Rare and Ultra-Rare tiers.

For those curious at how the data is shaping up, however, here is our best guess at this point:

These rarity tiers represent a major breakthrough in our understanding of egg species, travelers. Not only does this knowledge impact buddy selection criteria (e.g. Dratini is likely to hatch - there's now much less need to walk yours!), but it helps place far less significance on the 2 km, 5 km, or 10 km egg attribute as a whole.

Best of luck in your egg hatching endeavors, travelers!

This new information casts new light on previous egg species distribution hypotheses. In our opinion, it is highly unlikely that these large gaps in the frequency counts would appear if our researchers were drawing from clearly distinct distributions.

Notably, these gaps are only visible now because of this larger sample size and the fact that dilution from the high volume of Pidgey/Magikarp/etc. has been removed.

We do not currently believe biome is influencing egg species - but more research is needed!

Why are the Rare and Ultra-Rare tiers difficult to distinguish? Is it possible there are only 3 tiers?

Despite examining many thousands of eggs in this ongoing research, Rare and Ultra-Rare eggs are ... rare! So the sample sizes for these two groups are still much smaller than the more common tiers. As more data pours in, these tiers will become more defined, as the Common and Uncommon tiers are now.

As for alternative relative frequencies - we have attempted to combine the Rare and Ultra-Rare groups. In this case the ratio between the Rare, Uncommon and Common groups would be approximated well by 1:3:6. However the observed frequency counts of the rare group do not seem to follow a binomial distribution. Here is a plot of the (sorted) cumulative binomial probabilities of the frequency counts of all species in this combined group:

These should be uniformly distributed between 0 and 1, but instead we have a few extremely high values and many low values.

Similar plots for the rare and ultra-rare groups under the assumption of four groups show that in this case the cumulative binomial probabilities fit a uniform distribution much better.

History of changes to the rarity tiers:

Over the past several months, the Silph Research Group has observed multiple changes to the egg rarity tiers. Here is a list of known events which disrupted the previous tier distribution:

Anecdotal reports which support this discovery:

Several unofficial research efforts to learn more about egg species have been conducted by Silph Road travelers outside the Silph Research Group. Notably, the results of these efforts fit this model very well.

Which comes first: the species or the distance (kms)?

Thanks to the unique clarity of species changes during the Christmas event we have gained new confidence that eggs are not awarded according to a pre-programmed distance ratio. Examine the distance frequency during and outside the event:

Notably, we see that the 10 km ratio was much higher during the event than outside the event. This is caused by the increase of Elekid, Smoochum and Magby, showing that when obtaining an egg from a Pokestop, species is rolled immediately instead of rolling distance first. (The p-value of the above 3x2 table, according to a Chi-Squared test = 0.00037%)

Contributions to this project were made by many Silph Researchers, but we want to highlight one researcher who first identified the rarity tiers, and was instrumental in this analysis and discovery: DrThod