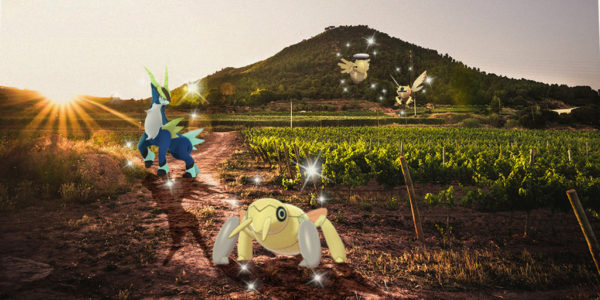 Happy Spring, travelers! Like the rest of the world, the Silph Research Group headquarters have been a little hectic this past month. To simplify the jobs of our volunteers, we’re going to be combining our research on shiny rates during events into a single article for each two month period. We’ll keep the newest and most relevant information at the top of the post, with past events shown below for reference. Now more than ever, we hope you are all staying safe out there on the Road.

The Buddy Up Event features two new shiny Pokémon: Illumise and Volbeat. These species are normally restricted to one hemisphere or the other, but for this seven-day event, travelers can find these fireflies roaming all over the world. Illumise and Volbeat are also available from Field Research Tasks and in Eggs. Data from this post will be restricted to Field Research Tasks and wild encounters.

Researchers have found 11,518 Illumise and 11,989 Volbeat since the event began, and nabbed 24 and 21 shinies of each, respectively. These data strongly support the standard, unboosted shiny rate for both species (combined 99% confidence interval of 1 in 365 to 1 in 795).

Spotlight got a bit of a surprise this week, with shiny Wobbuffet making a special appearance. Wobbuffet (without a party hat) has never been available to catch in its shiny form in the wild before. Researchers were eager to see whether this species might get a surprise shiny rate treatment as well.

Researchers tracked 4,305 Wobbuffet encounters in Spotlight Hours all across the world, with 7 lucky researchers receiving a shiny. These data support the standard, unboosted shiny rate (99% confidence interval of 1 in 290 to 1 in 1,570).

As boosted shiny rates are common in other events with a short time window, researchers were keen to test whether the same would hold true for GO Battle Day. Data is still rolling in, but so far researchers have gathered data on 324 Marill rewards and were rewarded with 35 shiny Marill. These data are still preliminary, but alone give a 99% confidence interval around the shiny rate of 1 in 6.4 to 1 in 14.6. Based on these data, the most likely scenario is that Marill is using a shiny rate of 1 in 10, a rate that has been consistently used for Raid Days. This rate will continue to solidify as more western time zones enjoy their event and more data is available. Stay tuned!

Spring is in the air! Researchers have a number of shinies on their “hit-list” this event, including Exeggcute, Marill, and Buneary wearing a flower crown! All three of these species are found only in the wild this event.

So far, researchers have gathered data on 3,133 Exeggcute, 3,211 Marill, and 3,133 Buneary, and have captured 9, 4, and 8 shinies of each, respectively. These data provide substantial evidence to support the standard, unboosted shiny rate for these species (combined data have a 99% confidence interval around the shiny rate of 1 in 275 to 1 in 855).

For this event, researchers are tracking Sudowoodo and Croagunk, two new shinies released for April Fool’s Day this year. Croagunk are available from Field Research tasks, Raid Battles, Eggs, and in the wild this event, while Sudowoodo are available in Field Research tasks, Raid Battles, and in the wild. We’ll be combining data from all of these sources for this post.

Researchers are setting their sights on tracking Baltoy encounters for this special weekend. Baltoy’s shiny form is making its debut in the world of Pokémon GO, appearing in Eggs, Field Research, Raid Battles, and in the wild during the event. We’ll be combining data from all of these sources for this post.

Researchers found 5,167 Baltoy during the event and 14 of these were shiny. The 99% confidence interval around the shiny rate goes from 1 in 200 to 1 in 830, providing some evidence that shiny rate is the standard, unboosted rate.

A Drive to Investigate

To celebrate the release of the new Genesect Special Research, the shiny form of Nincada is now available! Travelers may find Nincada in the wild, and, if they purchased the Special Research Ticket, in exclusive Field Research tasks.

Nincada shinies came thick and fast for our researchers, with 18 found in just 887 encounters. Our 99% confidence interval around Nincada’s shiny rate was narrowed down to 1 in 29 to 1 in 99 thanks to these data. Therefore, these data provides strong evidence for a boosted shiny rate, likely near the “Permaboosted” rate used previously for rare species.

Travelers all over the world are ready to test their mettle in the inaugural season of the GO Battle League. To celebrate, shiny Timburr has been released, available in Eggs and Raid Battles. Researchers donned their battle gear and set out to investigate their shiny rate.

Researchers raided and hatched 228 Timburr during this short event, and landed 5 shinies for their effort. This data is too small to draw strong conclusions, but it supports a boosted shiny rate for Timburr (99% confidence interval of 1 in 20 – 210). Furthermore, it is likely that the shiny rate of Timburr will remain high after the event ends.

Things are getting dark this weekend. Darkrai returns to Raid Battles, and the bright red shiny Skorupi has been released! Skorupi are available in Field Research, Raid Battles, Eggs, and in the wild this weekend, and that is where our researchers are focusing their efforts. We’ll combine data from all of these sources for this post.

Researchers managed to find 1,566 Skorupi this weekend, a reflection on how rare they were. Researchers were rewarded with 8 shiny Skorupi out of these encounters. These data do strongly support either an unboosted or boosted shiny rate, with a 99% confidence interval going from 1 in 130 to 1 in 695. It’s possible that the “Medium Event Rate” was used, but we find it more likely that Skorupi were unboosted and our researchers were a little luckier than usual.

Thanks for reading, travelers!

Big thanks to Scientist PhoenixCrystal and Lead Researcher SarcasmCloud for their leadership of these efforts!