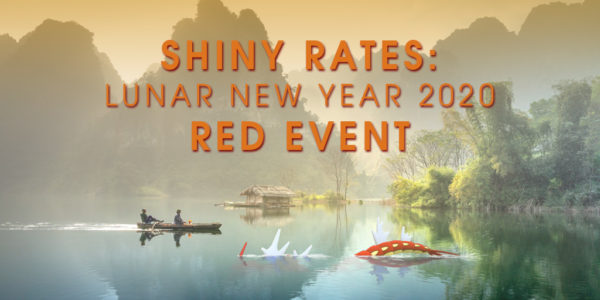 Hello, travelers! The Lunar New Year event is here once again! This year, from January 24 until February 3, red Pokémon will be appearing more often in Raid Battles, Eggs, and in the wild. Trainers can also capture a bright red, shiny Gyarados in the wild and in Tier 4 raids, and even more unexpectedly, shiny Magmar in the wild. Our Silph Researchers have been hard at work determining the shiny rates of these two Pokémon. Will the rates leave them feeling blue? Let’s take a look at what they’ve found so far!

As Gyarados and Magmar break from the usual pattern for their families (only shiny Magikarp and Magby are normally available), researchers were curious how these trend-setters might be treated. We gathered data on 636 Gyarados encounters (both in raids and in the wild) and 2,188 Magmar encounters since the event began. Researchers were treated to 17 shiny Gyarados and 5 shiny Magmar for their efforts. The 99% confidence intervals around their shiny rates are 1 in 20 – 75 for Gyarados and 1 in 175 – 2,030 for Magmar.

These data lead us to conclude that Gyarados is using a shiny rate significantly higher than the base shiny rate. While Magmar data is a bit slimmer, these data suggest that Magmar’s shiny rate does not differ from the base rate.

This article will be updated as more data comes in! Thanks for the read, travelers.

Data collected by Silph researchers clearly indicate that Magikarp is also enjoying a boosted shiny rate for this event! Researchers have encountered 2,289 total Magikarp and 18 shinies since the event began. The 99% confidence interval around this shiny rate is 1 in 75 to 1 in 225, which is well above the unboosted shiny rate. Get to fishing, travelers!