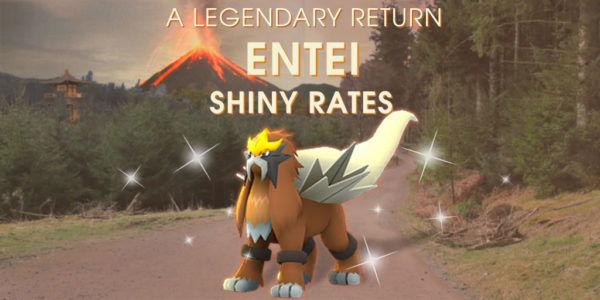 Greetings once again, travelers! The legendary fire-type Pokémon Entei has made its return to Raid Battles! Entei will be available in Raid Battles from 4 p.m. – 7 p.m. local time on July 14th. Legends tell of Entei running across the land due to its extreme power, and that’s what our researchers have done while investigating the probability of encountering a Shiny Entei. Previous Raid Day Pokémon have used a 1 in 10 shiny rate, and we expect Entei to conform to this standard. Data is already piling up, so let’s take a look at what we’ve found so far!

Raid Days around the world are complete! Researchers challenged Entei and completed 2601 raids and earned 231 Shiny Entei for their efforts. We can reasonably conclude that Entei used a nice, clean shiny rate of:

which is in-line with previous Raid Day shiny rates. Thanks for stopping by!