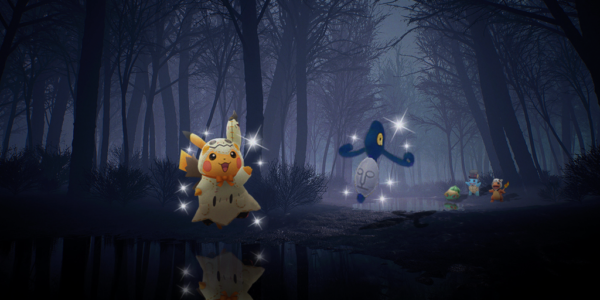 Greetings, travelers! It is once again the time of year where there is double candy aplenty and ghost-type Pokémon as far as the eye can see. This year, Pikachu and its friends Bulbasaur, Charmander, and Squirtle are dressing up to go trick-or-treating while Unovan newcomer Yamask makes its appearance in Pokémon GO. Each of them also has the possibility to appear in their shiny form! Silph Researchers have hit the pavement in order to investigate the shiny rate of Yamask and Pikachu. (In the end not enough data could be gathered on the costumed starters by our research group to accurately determine their shiny rates.)

Yamask and Pikachu have been difficult to come by this Halloween. Researchers have encountered just 2,283 Pikachu and 2,095 Yamask, nabbing 8 and 6 shinies of each, respectively. With this small data set, we don’t have any evidence that the shiny rate differs between the two species. Aggregating all of the data together, we can estimate a 99% confidence interval around the shiny rate of 1 in 170 and 1 in 700, which provides some evidence for the standard (unboosted) shiny rate.

Thanks for the read!