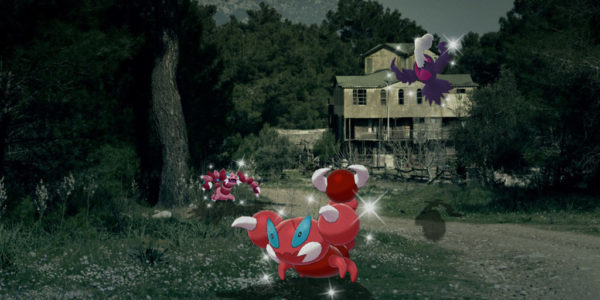 We have been keeping a close eye on the activity of Team Go Rocket, their nefarious leaders, and Giovanni. And what we have been anticipating finally came to pass this weekend with another global takeover by Team Go Rocket. Thankfully, trainers and researchers alike jumped to the chance of thwarting their evil deeds, but not before they were able to disrupt the natural order of the world. They attracted a swarm of Dark and Poison-type Pokémon, including Skorupi, and coaxed the nightmarish Darkrai out of hiding and into Raid Battles. With the chance to encounter both of these species in their shiny form, our fearless researchers charged into battle. Let’s see what we discovered!

Researchers completed over 1,800 Darkrai raids this weekend! Their efforts granted them 86 shiny Darkrai, leading us to conclude that Darkrai was using the standard Legendary shiny rate of 1 in 20. Oddly enough researchers found fewer Skorupi this weekend than Darkai, only managing 1,561 scorpions, underscoring the unusually low spawn rate for an event-highlighted shiny. Researchers found 8 shiny Skorupi, which, while a bit higher than expected, does not provide significant evidence to reject the standard, unboosted shiny rate (99% confidence interval of 1 in 90 to 605).

Until next time, travelers. Stay vigilant – we never know the next move Team Go Rocket is going to plan!