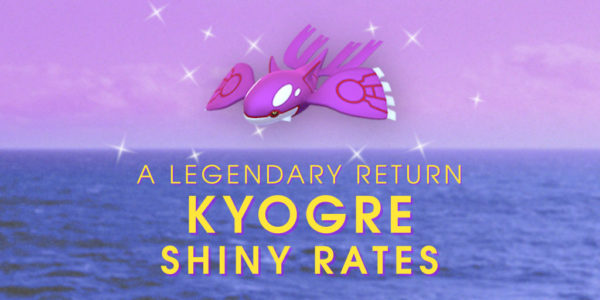 Greetings, travelers! We are delighted to bring you some shiny news today. Kyogre has once again emerged from the depths to challenge travelers in Legendary Raid Battles around the world, with a chance to encounter its shiny form after a victory! Last time we saw Kyogre, its shiny form appeared in roughly 5% of encounters. The 1 in 20 shiny rate has been consistently used for Legendary Pokémon (with the exception of Raid Days). Our tireless researchers are never content with resting on past laurels though. Let’s see what the data have to say this time!

In our three-day shiny hunt, researchers completed 1,066 Kyogre raids and 54 lucky researchers found a shiny surprise. From these data, we can establish a 99% credible interval1 of:

This is great evidence that the standard 1 in 20 shiny rate is still in use. Thanks for stopping by!

1 This is for the statistics nerds out there. The Silph Research Group is trying out a slightly different method of displaying the range of likely shiny rates. Several months ago we switched from using a 95% confidence interval based on a simplifying assumption (normality) to a Bayesian approach that is more suited to calculating confidence intervals when the probability of success is low. (Specifically, we were using a noninformative beta distribution as a prior that was updated by a binomial likelihood function). However, the idea that 5% of our confidence intervals did not contain the true shiny rate is unfair to the millions of travelers around the world whose decisions are influenced by this information. As such, we are switching to a 99% interval. This interval will be wider, but it is more likely to contain the true shiny rate. Additionally, for cases where a previous shiny rate has been observed, we are now using a slightly informative prior distribution instead of a noninformative one. This change means that we will need a bit more evidence to convince us that the shiny rate is different from before. It also means that instead of calculating a confidence interval, we are defining a credible interval. In practice, the differences between these two is not very important, but it is important to note that the credible interval does not have the same precise probabilistic interpretation as a confidence interval. We hope that both of these modifications lead to more consistent and accurate results. Happy hunting!